Carrots are the nation’s favourite vegetable – 75% of Britons say they eat carrots regularly and we crunch our way through more than 10 billion carrots each year.

The British carrot is available all year round and is a vegetable we all know and love – but it wasn’t always so readily available. In years gone by, the carrot was considered positively exotic! It is thought that the carrot first came from Afghanistan sometime around the 7th Century AD, when they were originally 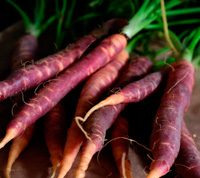 purple! Carrots were known to both the Greeks and Romans. In fact, the Greeks called the carrot “Philtron” and used it as a love medicine – making men more ardent and women more yielding.

The Roman emperor Caligula, believing these stories, forced the whole Roman Senate to eat carrots so he could see them “in rut like wild beasts”! India, China, and Japan had established carrots as a food crop by the 13th century. In Europe, however, they were not well known until well into the Middle Ages. At that time, doctors prescribed them for everything from sexual maladies to snakebite.

Integral to many recipes

The orange carrot is thought to have originated in 16th century Holland where the original red, purple, black, yellow, and white varietals were hybridised to today’s bright orange, with its potent dose of beta carotene. Carrots moved to England, during Elizabethan times. Some Elizabethans ate the roots as food; others used their feathery stalks to decorate their hair, their hats, their dresses, and their coats. Carrots are extremely versatile, delicious either raw or cooked, and are an integral part in many recipes from around the globe: America is famous for mouth-watering carrot cake; in India carrots are used to produce a delicious fudge-like dessert called Halva. Carrots are also an important ingredient in many Jewish recipes such as Tzimmes – a sweet stew which is usually is orange in colour; and of course, carrots were on the menus of many of the hotels in Vichy in France as part of the ‘cure’ (for overloaded digestive systems), from where the traditional recipe of Carrots Vichy came.